It seems as if this blog has been veering towards software for a while now, and this post is about as far from hardware as it's ever been --- but hey, it has LEDs!

The problem of the Dining Philosophers was first described by Dijkstra in 1965 as an example of resource allocation in concurrent (operating) systems. Briefly, five philosophers sit around a table with a bowl of spaghetti in the middle, spending their time alternately thinking and eating. There are five forks at the table, one between each philosopher, and in order to eat, a philosopher requires those adjacent to him.

Two important properties to be addressed by a solution to the problem are: safety and liveness. The first means that the solution is free from deadlock while the second requires that every philosopher eventually gets to eat. There are many solutions but the one implemented here is that proposed by Dijkstra himself: freedom from deadlock is ensured by introducing an asymmetry: the lowest numbered philosopher reaches for his right-hand fork first while the others reach for the fork on their left.


In the solution, each Philosopher is implemented as a Task and each fork as a Semaphore.

Tasks are non-preemptive, light-weight threads of control, they run until they call a blocking function, for example waiting on a Semaphore or sleeping for some time.

There are two kinds of task, the implicit one which runs setup() and loop(), and explicit ones which inherit from class Task and must provide their own stacks, here, 50 words.

In the example, the main setup() initialises the Task system and starts the explicit tasks; it then implements the behaviour of Philosopher #4 in its loop().

In the video, red LEDs indicate a thinking philosopher and green ones a philosopher eating spaghetti.

As always, the Task library is available on Github for Arduino and Energia.
Posted by Steve at 21:18 No comments:

When it comes to debugging programs, the first tool in my toolbox for compiled languages like C or C++ is usually 'print'. I don't tend to bust out a debugger unless I'm in an IDE such as IntelliJ.

This can pose problems for me in a relatively print-challenged environment, such as msp430 on Linux. Last night I had found myself in just this situation when I found myself musing on why the msp430 upload tool was called mspdebug. A quick search found a nice manual and a few minutes later I was debugging away.

With the sketch already uploaded to the board, this script shows how to:


If you're interested, the sketch is a rather convoluted version of Blink.
Posted by Steve at 14:50 No comments:

It's very satisfying to build something for which you've all the parts to hand, there's no waiting around, just immediate gratification. This little build is such a thing. It's a dual-voltage (5v and 3.3v) power supply which plugs into a breadboard and is handy for projects which aren't powered from a USB tether (e.g., wireless microcontroller prototypes or projects which don't use a microcontroller at all, hard as that might be to believe). 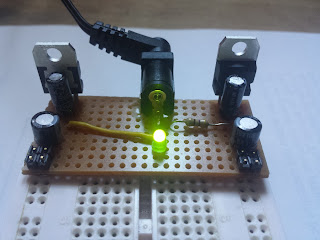 It's loosely based on the circuit below, although I used different values for the capacitors, having first done a bit of research to discover that the 100nF ones are used to filter high-frequency noise. If I have problems with that in the future I'll add them.

Interrupted is a new approach to developing low-power, low-latency Arduino sketches, which was motivated by two observations:
Taken together, these two points mean that Arduino sketches aren't easily battery-powered, while the second results in a cargo-cult of code copying. Lastly, timed sleep in Arduino is provided by delay(), which itself is busy-waiting. This increases latency, the response time to external events such as button-presses.

And so to an example; the sketch below manages a very simple hardware configuration composed of an ATtiny85, an LED and a button: the button turns the LED on and a timer turns it off again. (You could imagine such a sketch driving a Useless Machine.)

In the main loop, the CPU sleeps in select(), waking up when an event occurs on one of the devices it manages. Three events are possible here:

The value returned from select() indicates which event has woken it up, allowing the concise construction of state-machines. If more than one event source is ready, the one added earlier in setup() is returned, implementing a crude form of priority.


The sleep-mode entered by select() is the maximum which makes sense for the devices currently active. In this little example, SLEEP_MODE_PWR_DOWN will be chosen because external and watchdog interrupts still work in this mode.

Much credit is due to Nick Gammon, for the great work contained in his Interrupts and Power Saving Techniques for Microprocessors forum-pages.

Very similar techniques were employed in the runtimes of the Conic and Regis environments developed at Imperial College (as well as the select system call, of course).

The library has been ported to ATtiny84, ATtiny85 and ATMega328 processors and is, as always, at GitHub. Its code footprint varies, depending on the functionality required by individual sketches, but the little example above comes in at 2.5kB.

Work remains to be done on this library including porting it to Energia (i.e., the msp430 family), porting existing sketches to use it and completing the repertoire of supported devices (e.g., SPI handling).
Posted by Steve at 14:37 No comments:

Recently I was surprised to discover that although I've made several projects using one, I'd never built a development board around the ATtiny85. With any project there are always design choices and a couple of important ones here were:

So I opted for the path not taken, requiring a breadboard and using protoboard, and the result is pictured above. Notice that protoboard allows the FTDI connector to be attached at right-angles to the chip (try that with stripboard!) and also exposes more of the breadboard for jumper cables (the 10k resistor connecting reset and Vcc is underneath the chip).

With the ever-useful Tiny-Safe-Boot bootloader and a bespoke entry in my arduino-tiny's boards.txt file, it's as easy as regular Arduino, at a fraction the cost!
Posted by Steve at 16:31 No comments:

Well after almost a year I decided it was time to update this project with improvements to both its hardware and software.

On the hardware side, the server is still the original Raspberry Pi model B, but I've mounted the nRF24L01+ radio on a neat little Slice of Pi board. (These boards also have traces for mounting XBees with their unusual pin spacing. And they're cheap!)

While I had the soldering iron out, I added a couple of status LEDs (see picture). The green one indicates recent activity on the radio, while the red one indicates a timeout but also flashes every time a packet is received. Both of them are driven by a single GPIO line on the Pi. (This was motivated by the radio cutting out on the Pi, probably due to the original Heath-Robinson jumper cable arrangement, and since its transplant it's behaved perfectly.)

On the software side, there are now quite a few little daemons, each doing one thing well:

All of these are, as usual, on GitHub.

Future software components planned for this system include a simple weather service to inject local weather data into the stream, and a client for one of the various IoT services now becoming widespread. (Here is a fairly recent overview of some of these.)
Posted by Steve at 09:40 No comments: