A project such as Magic Mouth (spotted at Dangerous Prototypes) is a fine example of the surprising power of the ATMega chip. With the addition of a simple audio amplifier and the impressive Webbotlib, your humble 8-bit microcontroller can turn English text into speech!

My first attempt at a project with a similar setup simply read text from the serial port and converted it into speech. (You can find the amplifier circuit schematic and Webbotlib code at Github here, it differs from Magic Mouth mainly by not depending on an external Arduino to supply the text to be spoken.) Here is a picture of it in all its homebrew glory; the amplifier is the little board piggybacking the Arduino clone, the 8-pin chip in the middle is an LM386. 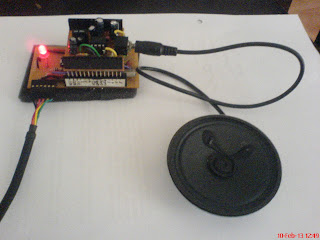 Around the same time, I came across an article about a piece of software which tweeted tics: TicBot. While more Eliza-with-Tourettes than major AI breakthrough, it can be very funny:

Under the influence of Xmas cheer, an idea was born... Voice of TicBot! It would be a humble Arduino connected to Twitter by Ethernet, speaking TicBot's words of wisdom in a robot voice! How hard could that be?

The first obstacle was Twitter's use of OAuth; while this solves the problem of third-party web-application authentication, it is a pain for a device without a traditional UI. Thankfully the good people at supertweet.net have solved this problem, providing an OAuth proxy for Twitter to which devices authenticate themselves using good ol' Basic Auth.

It was then quite straightforward to write a little sketch which polled api.supertweet.net every 10 minutes for TicBot's timeline (using JeeLabs' handy Ethernet driver) and grubbed through the response for the id and text fields; no space for a fancy JSON parser here!

Fortunately a solution turned up in the shape of an Arduino port of Webbotlib's text-to-speech module, TTS. (This was a lucky piece of googling --- my Romanian is non-existent.) It required some work because my amplifier expected its PWM input to come from pin 3 whereas the TTS module emitted it on pin 10, which was needed for the Ethernet SPI. Adding the required functionality for PWM on pin 3 was achieved with the help of a nice online tutorial. An Arduino library updated for version 1.0 and with this functionality and some more examples (including the sketch for VoTB) can be found here.

With these problems solved, Voice of TicBot was finally operational! Unfortunately it was also a failure: the gnomic nature of TicBot's utterances combined with the low quality of the speech rendition made it necessary to visually consult twitter.com whenever output was heard! Here's an example of its output.

(All of this reminds me of a (possibly apocryphal) story about Stephen Hawking's first speech synthesizer: his students were pressed into service as translators, due, one assumes, to their familiarity both with the subject matter and the machine's vocal stylings.) 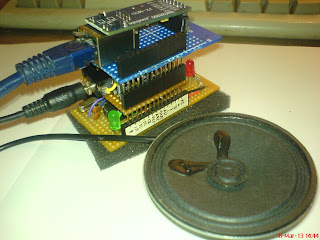