Not long after writing about how ATtinys have no bootloader support, I came across Adafruit's Trinket, an obviously-bootloaded ATtiny85! However as this board's USB bootloader consumes over 2.5kB of flash, it could not coexist with wireless networking in the form of the RF24 library I'm interested in (which leaves only 2.5kB free after inclusion).

Nevertheless, googling "attiny bootloader" turns up several interesting links, notably TinySafeBoot. This is both tiny (550 bytes) and safe (providing password support). Its size means there's still almost 2kB left free in my desired configuration which I expect should be enough for some interesting wireless sensing applications --- stay tuned for more on that.

TSB, which is GPL-licensed, comes with a generic AVR bootloader blob which it tunes for your target hardware, rather than requiring messing with makefiles and building-from-source. In the case of our ATtiny development board, the desired target is an ATtiny84 with pins PB1 and PB0 connected to software-serial Rx/Tx:

The resulting bootloader can now be uploaded to the development board using an external programmer. Thereafter TSB talks to the bootloader to upload programs:

(The bootloader auto-detects the bit-rate which the uploader is using; here I'm just taking the default of 9600B.)

The obvious next step is to integrate TSB into the Arduino IDE, building on the Jeelabs' work to obtain an environment indistinguishable from a normal ATmega-based Arduino; it would simply replace that part of platform.txt, specifying tsb, with appropriate flags, as the uploader.

Unfortunately, I think due to the way tsb handles its input stream, it doesn't take kindly to being called from a script; it's written in freebasic, maybe it's a feature of that platform. So, with the help of strace, I wrote a one-shot firmware uploader in C (gist here) callable from the Arduino IDE.

Now I can upload sketches from the Arduino IDE to my ATtiny development board without any additional hardware! The 'burn bootloader' functionality also works (with the aid of an external programmer) to burn fuses and install the custom firmware file generated above. My fork of Jeelabs' repository is available here, just clone it into your sketchbook/hardware folder.

The only hardware modification I made to my development board was the addition of a series 100nF ceramic capacitor between reset and DTR, to reset the ATtiny when the IDE wants to upload a sketch via FTDI.

A diagram showing the pin names of the ATtiny84 in the Arduino IDE: 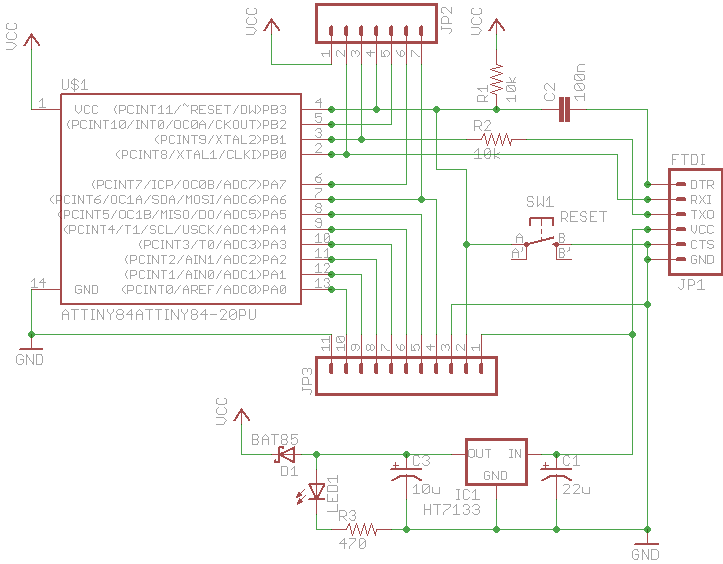 The schottky diode acts as a block to allow the board to be powered from an external battery. In this mode, the LED is disabled and no reverse current flows through the regulator. A schottky diode was used because of its low forward voltage drop (0.4v); an ordinary diode would drop the 3.3v supply to 2.6v. (Maybe that's why 3.6v regulators exist!)
Posted by Steve at 14:49 2 comments:

While not exclusively devoted to AVR microcontrollers, this blog has concentrated on them for one simple reason: they are very easy to get started with. Whether for beginner (Arduino) or professional (GNU make and gcc), the software ecosystem is very mature. Furthermore, a proliferation of cheap Arduinos (and clones) means that even lack of hardware experience is no barrier to entry.

Texas Instruments has been relatively late to the party with their launchpad line of msp430-based microcontrollers and, until quite recently, a steep learning curve awaited the newcomer. That has all changed with the creation of an Arduino-compatible core for the msp430 and a fork of the Arduino software, Energia, which provides an experience almost indistinguishable from Arduino itself.

One further thing missing, until now, was ease of prototyping with the microcontrollers themselves outside of the launchpad development kits. The latter actually contain two microcontrollers, one to act as a usb programmer and the other to run user-programs. (While the first actually provides more features than that, that's all a beginner sees.) Thus a hobbyist wanting to use an msp430 for a real-world application had two choices: use the launchpad experimented board itself 'in the field', or program the microcontroller in the experimenter board and then move the newly programmed chip to its permanent home by hand. Easy field upgrades of firmware would require a more complex solution.

Such a solution has been in the works by members of the 43oh community for about a year now. This is a combined USB-stack (cf., v-usb) and bootloader which allows uploading of user programs via a simple USB cable. Only three resistors are required to support USB.

My hardware instantiation of this work (done entirely by others at 43oh and downloadable here) looks like this:
The bootloader itself is bootstrapped using a development  board: I programmed all of my msp430s at one sitting! Once bootstrapped, user programs can be updated with a simple USB cable and a program called boot430.

The final piece of the puzzle was programming one of these from Energia. Conventionally Energia uses an external program, mspdebug which unfortunately does not speak the same protocol as the USB bootloader. While it is unfortunately not currently possible to configure Energia to use a different uploader, this is a problem which the Arduino team has already encountered and solved in its still-beta version-1.5.

Thus, my somewhat-heretical solution to this problem (at Github): port the Energia launchpad cores back to Arduino, using the same software infrastructure as for the ATtiny development board described earlier. This seems to work quite well, although Arduino has still-unresolved issues in the area of libraries, which leads to confusion about which libraries are actually available on the current platform.