The picture shows an lcd2usb clone attached to a SqueezePlug server running on a Raspberry Pi. It is housed in a perspex box, retrieved from a workplace bin, in which an Apple Magic Mouse was shipped. (Perspex boxes from Apple make great project housings!) The media server communicates with it via lcdproc and a homebrew perl script, made significantly simpler by the fact that both lcdproc and the Logitech Media Server provide command-line interfaces. The two switches allow playback to be paused and stopped, respectively.

While its firmware was used unchanged from lcd2usb, the hardware was simplified by removing the programmable contrast control, support for multiple display types and for in-system programming. Another change was necessitated by the fact that the display used (a JHD204A), while claiming to be HD44780-compatible, has its contrast and Vcc pins (2 and 3) swapped. 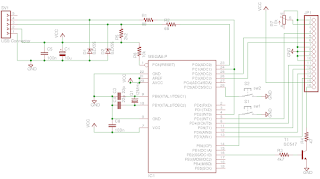 The circuit was assembled in typical 'backpack' style on a piece of stripboard. A nice feature of this display is that it provides connector pins at the top and bottom, allowing functions to be connected to whichever edge is most convenient. The layout was performed manually with pencil and grid-paper as shown below. 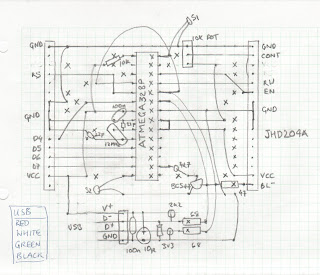 Email ThisBlogThis!Share to TwitterShare to FacebookShare to Pinterest
Labels: diy